Yes, it was in fact a blizzard of historic proportions, but most of the devastation was suffered on the interior of houses with children staying home from school. There was also a nice amount of snow outside, which presented a good learning opportunity for parents whose kids are now old enough to enjoy it.

What I discovered is the following.

I would [almost] rather retake the bar exam than get my toddler dressed, undressed, and redressed for the outdoors. You layer her up, haul the puffy ball of toddler out the door, place her down gently and uncertainly, and wait 6 seconds before she tumbles and yells, for the first of a hundred times, “I can’t get up.” To enjoy the snow, they have to be warm, but to be warm they have to be 90%-immobile chubby stick figures.

Understandably, she analogizes snow and sand. On vacation, she peed in the ocean without repercussions (yes, the ocean you swim in), and now she wants to freely pee again. “No love, you can’t pee in your clothes.” “No, you cannot remove your clothes and pee on the snow.” “Let’s quickly go inside and go back out again.”  “You don’t need to go anymore? You’re lying but I will gratefully play along.” 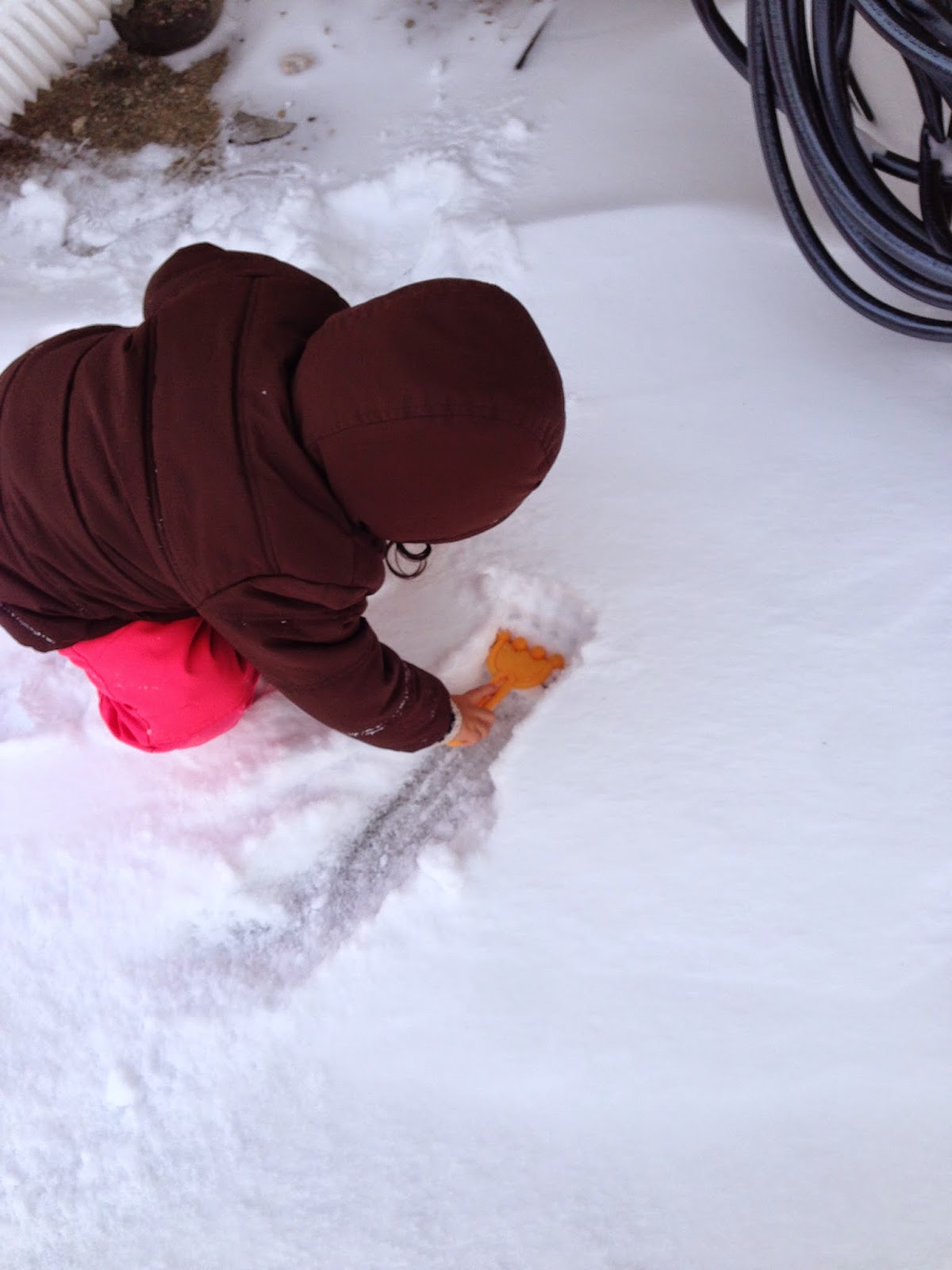 In an inappropriately goal-oriented manner, you work on building a snowman out of the uncooperative, powdery snow. When humpty-dumpty isn't calling for mama helplessly (and joyfully, unless you linger), she is smashing the modest sized balls you have managed to put together. You get irrationally annoyed, but hold it in because you’re out there for her, not yourself, and … remember that time you became an adult?

Snow mittens for toddlers fit about as well as oven mitts on adults. When your kid’s patience runs thin (and toddlers are known for their patience) -- when the thumb falls out of the thumb hole one too many times, or she realizes she’s as effective at handling snow with her mittens as she is at handling food with chop sticks -- you have about 3 minutes to get back indoors. Your toddler’s initial glory-filled moment of hand-agility and sensory glee is rapidly replaced by a shocking pain of the fingers. You will be frustrated at her shock: “I literally just told you it would be cold if you removed your mittens, you know that it is cold because you face-planted into the snow several times, and you are a sufficiently developed human being to understand this basic logic (according to grandma, you are a remarkably developed child prodigy so please, work with me).” You will then be frustrated at your toddler’s sense of urgency, because the time it took to get her fully dressed was rivaled only by the time it took you to (until now, unsuccessfully) persuade her to go back indoors. But now she sees her hands getting red, her sand (I mean, snow) toys call out to her but her fingers don’t listen, and though she doesn't know of “frostbite,” she screams as if her fingers are a snowflake away from detaching. 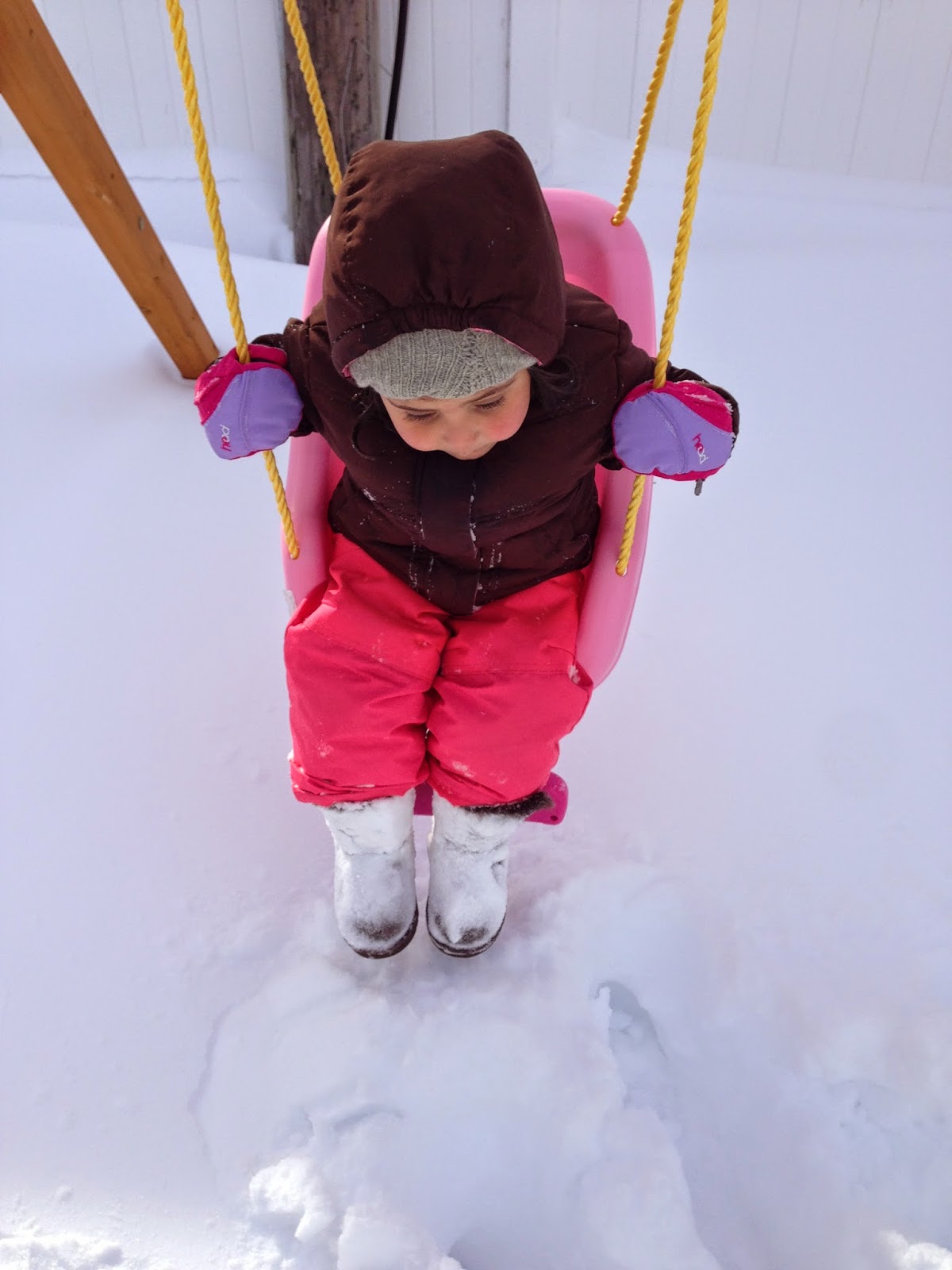 You rush into the house less carefully than you had planned. Snowwater is everywhere and you can’t decide whether you should undress her first or tear off some of your own layers to better assist her. She continues yelling, but only because she already has so much momentum that it would be wasteful to give up. Shortly thereafter, your clothes and her clothes lay dangerously close to the boots and the melting situation that is taking over your house but nothing matters because you finally got her a snack, her cheeks are rosy and bladder empty, and you think (aloud, within earshot of your husband) about what a remarkable parent you are.

And with ricotta pancakes and other breakfast foods for dinner, your first parental snow day is complete. Congratulations.
Posted by SayShenanigans at 4:53 PM No comments: